Jason Theodosakis, MD, MS, MPH, FACPM — “Dr. Theo” — is a medical doctor, researcher and medical school professor who is both residency and fellowship trained in the specialties of Preventive Medicine and Sports Medicine. He also has Master’s degrees in Exercise Physiology and in Public Health and undergraduate degrees in both Chemistry and Biology.

Dr. Theo is considered to be “America’s Joint Health Expert” and was named as one of the 14 greatest doctors in the world by Rodale Press. Dr. Theo’s clientele includes the young and old; royalty, celebrities, and professional and collegiate athletes from around the world. He is deeply embedded into charity by donating his time to a variety of organizations. In addition, he has donated over $300,000 in money and products to various charities and organizations who cater to those without health coverage or the money to afford proper treatment.

Dr. Theo is best known as the #1 New York Times Best-selling author of one of the most important, influential and popular joint health books ever written.

The Arthritis Cure is now in at least 12 languages and over 60 countries (see below). The book is recommended by physicians, nurses, dietitians, physical therapists, and a whole host of other experts and, despite being written as a “how-to” guide for laypeople to take care of their joints, is actually used as a textbook in some colleges and medical schools. It’s no wonder that Newsweek magazine, in reviewing the book, proclaimed “Arthritis treatment will never be the same.”

The Arthritis Cure – Revised Edition was published in January 2004.

Dr. Theo has been credited with ushering in the integrative approach to a number of conditions, and has been the driving force behind the public’s introduction to several joint health treatments, studied and sold as drugs in other countries, including: glucosamine, chondroitin, SAMe, Hyaluronic acid, and ASU (avocado-soybean unsaponifiable). He is frequently invited to speak as the keynote speaker in the U.S. and internationally. He has served as an expert witness in the area of dietary supplements and is involved as an industry consultant for product formulation, education, marketing and quality control.

His treatment program is believed to have saved tens of thousands of lives world-wide by obviating the need for joint surgeries and the use of medications, such as anti-inflammatory drugs (e.g. Celebrex, Vioxx, Aleve, Advil, Motrin, and many others). In fact, over a year before Vioxx¨ was removed from the market, Dr. Theo wrote: “I wouldn’t be surprised if one or more of these [COX-2] drugs were removed from the market.” After more than 15 years, the FDA finally caught up to the warnings Dr. Theo highlighted in his work, namely the fact that anti-inflammatory drugs such as ibuprofen (like Advil® and Motrin®), naproxen (like Aleve®) and others can be fatal with even short term use. You can see the 2015 warning from the FDA here. Fortunately, those who follow The Arthritis Cure® Treatment Program are able to reduce or eliminate the need for such drugs.”

Partial Listing of Foreign Editions of The Arthritis Cure 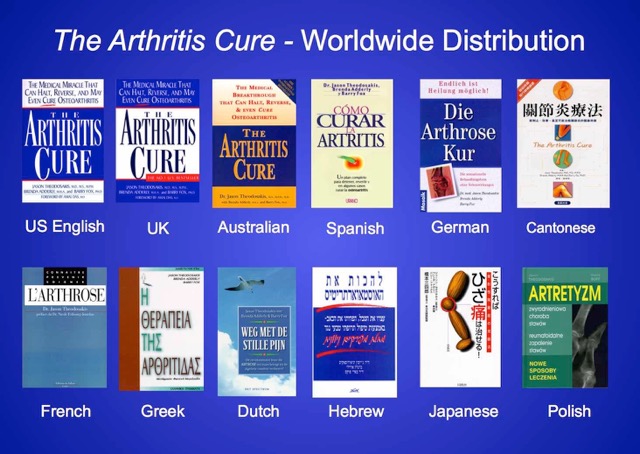 Note: Orders shipping outside the US are subject to local import regulations.

Canadian regulations allow import of only 3 bottles per person per order.

After reading the FAQs section, if further information is required:

Contact our customer service manager at orders@drtheos.com or 1-520-815-5030 for order or shipping related questions.

You can view and print AVOSOY Frequently Asked Questions online.